When I was a kid, they had those Sears DieHard Battery® commercials that showed their particular product saving someone's hide - over and over and over again after their battery dies at the hand of a brutally cold situation.

My favorite was the one that showed some dude cranking hundreds of cars at Soldier Field after their owners' batteries had died in the bitter cold of the parking lot while they sat in their presumably freezing seats stuffing their faces full of sausage sandwiches and beer while watching their Monsters of The Midway destroy a foe:

The thing I love, is the commercial leaves the impression that you can crank and crank and crank on a battery, and it'll just keep going without ever having to recharge or anything!

HOLY SMOKES! Are you kidding me?

Well, misleading me, might be a better choice of words...

This reminds me of one of my favorite customer service calls that happens form time to time from customers who get their brand new battery - Car, Truck, Motorcycle, ATV... you name it -- and then kill it in an hour. The call usually goes something like this:

Customer: "Yeah, I just got my battery and it's dead."

Me: "Sounds to me like the battery may just need to be charged, sir."

Me: "Indeed, it is brand new, but it's still a battery, sir..." And then, we talk about the following:

In fact, those numbers on your battery - CCA, CA, and RC - MEAN something... And if you outpace them or have a battery too small for your particular vehicle, you could find yourself hoping that some guy with a fresh battery on a little red wagon comes by soon.

What Does They Mean?

Back in the olden days of Automotive history, cars had carburetors instead of fuel injection, so cranking power was huge concern with drivers and manufacturers alike when it came to choosing a battery for a car.  The exact calculation for the size battery to crank a car was directly related to the number of cylinders an engine had and the Engine Cubic Inch Displacement (CID) of its block.

As you can imagine, on really really cold days (like in the commercial) cranking an engine was no easy task. In fact, one might find themselves turning the ignition key for ten to twenty seconds, instead of the one or two we have to turn a key now! This is when "they" (the same experts who "say" things) came up with the numbers for Cold Cranking Amps, Cranking Amps and Reserve Capacity...

Cold Cranking Amps rates the battery's ability to deliver amperage for 30 seconds at 0 degrees F while maintaining a post voltage of 7.2 volts (1.2V/cell). For example, an 800 CCA battery can deliver 800 amps for 30 seconds at 0 degrees F and still have 7.2 volts, measured across its posts. This is a very important for vehicles in cold climates. CCA tells the consumer how well to expect a battery to crank the engine in cold weather.

Cranking Amps The CA rating is the current (in amps) that a battery can deliver for 30 seconds at 32 degrees F while maintaining a minimum voltage of 7.2 volts (1.2V/cell). This is not to be confused with CCA, especially when choosing a battery for use in cold climates or at Soldier Field.

Marine Cranking Amps (MCA) The MCA is the current (in Amps) that a battery can deliver for 30 seconds at 68 degrees F while maintaining voltage of 7.2 Volts (1.2V/cell). DO NOT USE MCA Ratings to choose a battery for your AUTOMOBILE - unless you live in Hawaii or Fiji. I PROMISE you, you will have a dead battery and be very frustrated.

Reserve Capacity (RC) measures the battery's ability to provide sustained current. This rating is important for batteries installed in vehicles with high key-off battery drains. Reserve Capacity is the time (in minutes) required for a steady 25 amp draw to pull the battery voltage below 10.5 volts at 80 degrees F. Reserve Capacity is an important consideration for vehicles that are frequently driven for short distances in stop-and-go traffic or those with high key-off loads where the alternator doesn’t have a chance to recharge the battery for very long.

As I said, all these numbers were calculated back in the olden days of Automotive history, and since most cars are fuel injected, CCAs and CAs are a little bit overrated when it comes to starting engines... However, they are very important for determining a battery's strength in cold weather and whether or not they meet your vehicle's minimum Cranking Specifications. That said, many automotive and battery manufacturers (like Odyssey) use a more modern calculation in determining a battery's ability: The Pulse Cranking Amp (PC).

Unlike CCA and MCA the pulse cranking ampere (PCA) rating does not have an "official" definition; however, Odyssey Batteries believes that for true engine start purposes, a 30 second discharge is unrealistic. With that in mind, the PCA is a very short duration (typically about 3 seconds) high rate discharge. Because the discharge is for such a short time, it is more like a pulse. This means, that for most modern engines, a smaller battery CAN be used, but it has to be the RIGHT Battery.

The Odyssey PC1200 is an example of a battery that is almost universal in its ability to start a daily driven vehicle that is smaller and lighter than its OEM Counterpart. You can buy it here. It delivers 1200 Pulse Cranking Amps, 900 Cranking Amps for 20 seconds and over an hour of reserve capacity in a very small (8 inches X 7 inches X 7 inches) design. 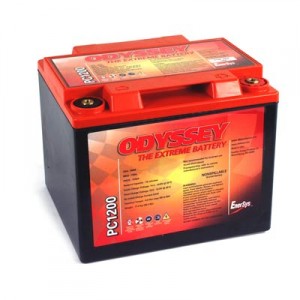 Just remember, ANY Battery you buy must be properly charged. Unlike the fine folks who advertise DieHard Batteries® would have you believe. But if you make sure to get the right battery for your application and performance, you'll be just fine.  And it won't matter at all if the temperature drops below 32 at kickoff.

To find the battery that's right for your vehicle and application, trust POWERSTRIDE BATTERY. You can reach them Toll Free at (877)5-POWER-9 for all your battery questions.